I’m a day early this week with my entry for the Flash Fiction for Aspiring Writers (FFfAW) Challenge, run by Priceless Joy, as I’m going to be busy for the rest of this week. The chances of being able to write anything over the next few days is slim. As this week’s photo prompt was provided by me I didn’t really want to miss it!

The challenge is that you write a story of 75-175 words inspired by the photo prompt below. I hope you all like it.

Millicent watched as the train neared the station, her earlier sense of trepidation rapidly growing into full-blown panic. He wasn’t going to take the news well – she knew he wasn’t!

She cast a gaze towards the exit, fighting the urge to flee – but that would just make it worse. He’d arrive home soon enough and then she’d also have to explain why she’d failed to meet him. She couldn’t do that…

With screeching brakes and weeshing steam, the engine pulled to a stop in a cloud of puthering smoke. Carriage doors flung open.

Edward grinned as he saw her, jumping down onto the platform with ragged hat in hand, hair as mussed as ever. He didn’t care who was watching as he threw his arms around her, placing a tender kiss on her lips. Sighing, she relaxed into his welcome embrace.

She had to tell him. Now. It would be better if he heard it from her rather than found out on his own. She drew a  breath. “Eddie, I’m afraid my mother has come to stay.”

This week’s photo prompt (as I mentioned above) was provided by me, so I thought I’d add a few facts and another few photographs for anyone who might be interested.

The photograph was taken in Grosmont, a stop on the North Yorkshire Moors Railway (NYMR) in England. This is a heritage railway that runs between the seaside resort of Whitby and Pickering, a journey of 24 miles.

The line was first opened in 1837 and was run by various companies until its closure in Dr. Beeching’s cuts of the 1960s. The the NYMR Preservation Society was formed in 1967 and the heritage railway established.

It’s now claimed to be the busiest heritage railway in the UK, possibly even the world – one source (unverified unfortunately) says that it carried 350,000 passengers in 2009! I visited a few years ago with my sister and my train-obsessed nephew.

If you’d like to know more about the NYMR you can go here or here.

Here are a few other (largely unedited) pictures I took while I was there: 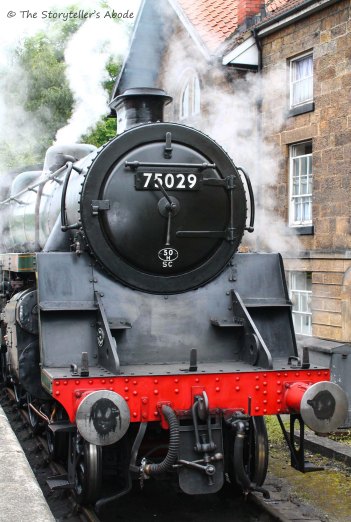