On day 194 of 365 Days Wild I went out on a rainy day walk in search of some winter greenery.

The first wintergreen plant that I spotted as I walked along the lanes was ivy. This common UK plant is tangled in bushes, wrapped around trees and growing on fences all along my route. Being an evergreen it is present all year round, but it is particular distinctive at this time of year as its berries are now ripening.

These berries are nutritious with a high fat content and so provide an essential food source for birds and insects during the winter months – especially later in the season once Autumn’s abundance has all been consumed. Birds that feed on them include thrushes, redwings, blackcaps, woodpigeons and blackbirds.

Their taste is said to be incredibly bitter and ingesting large amounts of them can cause breathing difficulties and fever, so they’re best avoided by human foragers and left for the birds.

Contrary to what seems to be popular thought, ivy does not harm or strangle the trees they use for support. They have climbing stems with specialised hairs that allow them to stick to surfaces as they climb, and once mature they are often self supporting. They have ground roots through which they draw nourishment and they don’t parasitize the tree. What they do do, however, is provide a vital habitat and food source for birds, insects and small mammals.

Once I turned onto the Millennium Walk it was the holly that came to dominated my view. Along the first stretch of the path there was lots of holly growth but no berries. This is because not all holly bushes actually produce berries. Whilst both male and female holly plants produce flowers, it is only on the female ones that the flowers then develop into fruits.

The female plants, covered in their glossy, red berries, are a little bit further along the path. It seems almost as if the boys and girls are don’t want to mix! If you’d like to know more about holly I wrote about it in this post a few weeks ago.

A third wintergreen plant that I spotted whilst I was out and about was a stretch of Leylandii hedging. Usually this is just background green and not of any particular interest. This time, however, there were raindrops caught in the fronds that glinted in the meagre afternoon light. They looked like little fairy lights, like nature’s own Midwinter decorations. I did actually snap a few similar shots on the pine and yew trees around the Nature Project but by then the wind had picked up and, sadly, every picture that I took was blurry. I’ll just have to spend some more time with them again soon.

That’s all for today. Have you been out and about recently? Let me know what you’ve seen in the comments! 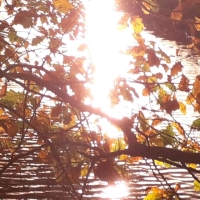