Edmund stood on the shoreline. Waiting. It was something he was good at.

As a child he’d waited for his father, watching the ticking clock. At seven pm, daily, the man would hear the governess’ report, granting him a fragment of his time: a smile, a question, a word of praise… if the report was fair. On days when he’d displeased the woman, the attention would be far less pleasant: a reprimand, a strike of the cane, a reminder of their family name.

He glanced at the watch. Not much longer, now.

Over the years, his resentment had grown. The gift of a pocket-watch on his sixteenth birthday had epitomised every wasted moment. His anger had exploded at the sight of the timepiece. The heavy gift-box had become an instrument of death as he’d swung it at his father’s head. The chain had wrapped easily around his fleeing governess’ throat.

As the watch indicated seven pm, he placed it neatly onto the stones of the beach – a monument to a wasted life.

And he walked into the sea.

To read other entries, click the little blue frog

This post is for Flash Fiction for Aspiring Writers, a flash fiction challenge run by Priceless Joy that asks us to write a story of 100-175 words based on the provided photo prompt. This week’s picture was provided by me.

For anyone that’s interested, the watch in the picture is actually a necklace that belongs to my sister. It’s a lot smaller than it looks in the photo – less than two centimeters in diameter. She bought it in Whitby when we were on holiday there a few years ago. I couldn’t resist borrowing it for a few photographs when we were sitting on the beach later that day.

I hope you enjoyed the story. It’s rather darker than most I write so I’d love to know what people think of it. It was originally meant to be the background for a ghost story, but unfortunately I couldn’t fit the whole thing into the word limit. This one had to be chiselled out of a much larger piece. That does mean, of course, that I now have another 350 word story ready for inclusion in a flash fiction collection. Yay! 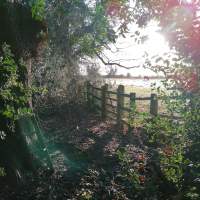